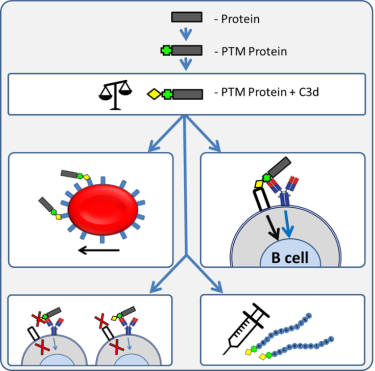 The presence of these antibodies is strongly associated with development of RA and with the severity of joint destruction. However, why antibody responses against PTM proteins are generated is currently unknown. Based on several lines of evidence and our preliminary data we hypothesized that PTM-proteins, by activating complement, would have an auto-adjuvant effect to facilitate the break of tolerance (Figure 1). In this theme, supported by an ERC consolidator grant, we therefore now study the role of complement activation of the breaking of tolerance against PTM proteins. These studies involve protein biochemistry, mass-spectrometry, complement activity analyses as well as in-vitro cellular binding/uptake and activation. In vivo analysis is aimed to reveal the impact of complement on the clearance and immune activation of PTM proteins leading to the break of tolerance. Ultimately the information will be utilized to block complement activation to prevent anti-PTM immunity as well as to make use of the PTM mediated adjuvant effect to boost responses against pathogens and cancer.

The development of novel antibodies to modulate complement activation

Currently there are two complement inhibitors in the clinic. Both work systemically, are extremely expensive and have side effects mainly related to infections. Alternative methods to modulate complement activity would be favorable and we aim to develop several complement modulating antibodies. For this purpose we use FACS sorting to select individual B cells, clone and express the desired antibodies and perform extensive engineering to obtain the desired functional properties. Here we make maximal use of the expertise of Prof. Parren within our team. The developed formats are made for use in an in-vitro human setting but also for use in in-vivo experiments in rodents. These inhibitory therapeutics are developed for use in several autoimmune diseases like RA and SLE but also in the setting of antibody mediated transplant rejection for which there is extensive collaboration within the Department. Next to inhibitory antibodies also tumor targeting antibodies are being tested now with optimized complement activating properties. These anti-tumor antibodies are tested together with the immunotherapy groups of the Department.

The levels and biology of complement proteins in health and disease

Complement deficiency, especially of C1q is highly associated with autoimmunity. Our efforts, in collaboration with the Department of Rheumatology, to identify novel mutations leading to C1q deficiency have highlighted that many different mutations can lead to this clinical presentation (van Schaarenburg et al. 2016) and that a wide spectrum of clinical presentations is possible with the same mutation (van Schaarenburg et al. 2015). Interestingly not only low levels of C1q are associated with disease also increased levels are observed in the clinics.  We described that increased levels of C1q are associated with active Tuberculosis (Lubbers et al. 2018). We now study, in collaboration with the Department of Infectious Diseases, why C1q is upregulated in the circulation and in the local tissue (Figure 2) and how this can be used as a biomarker and as a possible target to intervene in the disease process. 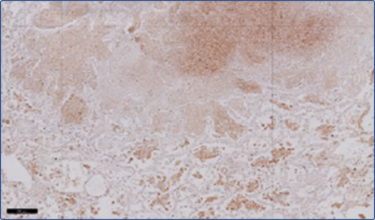 The production of C1q is limited to only few cell types, such as dendritic cells, macrophages and mast cells, and we aim to understand the impact of local C1q production in the immune processes involved in pregnancy, tumor immune escape and adaptive immune responses.

C1q is targeted by autoantibodies and the molecular make up of anti-C1q autoantibodies as well as the impact of such antibodies on the physiological processes in which C1q is involved are currently unknow. We biochemically and genetically characterize these responses and study the impact on physiology in in-vitro models.